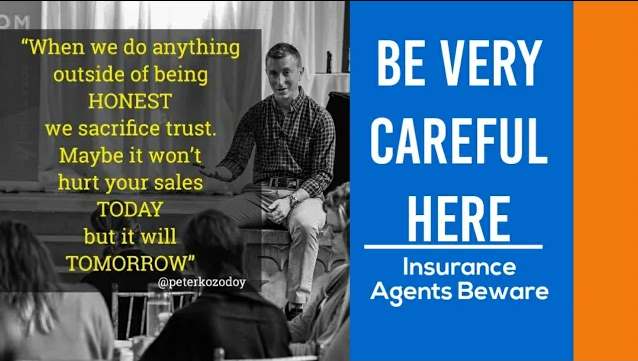 There's a bit of a conundrum, a dichotomy, if you will, in the sales world, where you have to be ambitious, you have to have a go getter attitude.
And you cannot be easily dissuaded and give up before you start having progress.

At the same time, though, there is such a  thing as a person with too much ambition. Let me explain. Had a person working for me, who was very ambitious, wanted to be on the leaderboard, wanted to be highly productive, and did everything this person could do to write as many policies as possible.

Sometimes, when blinded by an unhealthy dose of too much ambition, a person can start to take shortcuts, a person can start to forget to do things that are otherwise impediments to doing more business. And by forgetting to do things I mean, in this case, for getting to ask health questions on Underwritten application, just first, a little bit here and a little bit there, like when the application for health insurance asks,

“Who's your current doctor?”

“What are your current medications?”

Because when you ask all the questions appropriately, sometimes not everyone is going to get approved. So what does that mean? If you're blind ambition is to an unhealthy level, it starts making a person who has less integrity than they should to be in this business,  to be literally responsible for someone's health or not to get a procedure paid for or not simply because a person in a capacity of as an agent lies on an application.

Now, is it a lie or is an omission?

If someone went to four specialists in the last three months, and you omitted all that information, and you submitted that application, as if it's the factual upon which the basis of the insurance company will decide whether or not to give that person coverage, or then later to potentially exclude coverage because they identify a material omission on the application, then for all intents and purposes, the agent lied.

The reason why insurance companies check the credit of the agents that their contracting is because they know that if your credit score is too bad, then the agent gets too desperate and they start doing shady things bad business. That does happen all the time. So we have to look out for in our industry that we don't get too hungry, that we're willing to do absolutely anything to get the business because there's a healthy balance between doing the right thing for the client, for the carrier and for yourself. And when you start blurring the lines when you accept a little bit of dishonesty, it gets easier and easier and easier.

I challenge you my fellow agents in the community maintain an impeccable credential and reputation.

The Bible says that a reputation is very hard to get. And it's a very valuable thing, a good reputation.

Proverbs 21:22 A good name is to be chosen rather than great riches, and favor is better than silver or gold.

If you do everything without integrity, and you take that slippery slope, and you go that easier route easier, easier, easier.
You start asking less and less questions on the application. On a life insurance question I've literally heard an agent say

“All I need for the life insurance application is who your beneficiary is.”

No, that's not all you need. It's really not.

Because you're purporting to fill out an application based on 30 health questions or something. So it gets easier and easier to lie, cheat and steal, just for the sole purpose of getting a commission that I would argue you have to fight every day to maintain your integrity, don't even let it in. Don't even let a glimpse of it in not even a blip. Not even one little thing that a person Oh, I forgot to ask that question. I'll just go ahead and wing it. I'll do I'm sure it'll be fine.

So I encourage you to go forward with integrity.

There are plenty of people out there who are going to give you referrals of other good people like them. If you keep on pressing toward the mark of doing things with integrity, there's enough business, you'll do it the right way.

You don't need to take shortcuts and you don't need to look for the magic pill. The magic pill is hard work.
It's talking to enough people. It's sorting the people like you're supposed to, because you're representing not only the client, but also the insurance company. And if everybody was just out there willy nilly answering all the questions no or never even asking the questions in the first place, insurance itself would be unaffordable for other people to buy. We have to set a higher bar in our industry so that we, as insurance professionals, get and then maintain higher reputation than we enjoy right now.